If you like gaming while high — and who doesn’t? — it might be helpful to know which strains are best suited for gaming. And, boy, cannabis sure is popular in the gaming community. No doubt: gaming and weed are a match made in heaven. Heck, gaming and weed go together better than a silky white California chardonnay and wild Alaskan salmon.

Of course, cannabis affects everyone differently, and the preferences of gamers are as diverse as the number of video games there are out there. So finding the best strain when you’re gaming while high can take a little trial and error. But, whether you’re a fan of Resident Evil, Halo, World of Warcraft, or you keep it old-school with Tetris or Pacman, you’ll find a strain on this list that will help your game.

A good rule of thumb, though, is if you’re playing a game that demands serious focus, look for Sativa-dominant strains. On the other hand, if you’re looking for something that will help you chill, go for an Indica-dominant.

Pineapple Express has long been popular in the gaming community. A cross between hybrid Trainwreck Pineapple and Hawaiian landrace sativa, users report that Pineapple Express is a “creeper-strain,” meaning effects can emerge slowly. Speaking of effects, Pineapple Express is known for giving users a sharpened focus on colors and sounds, making it the ideal strain for immersive games like Grand Theft Auto and Call of Duty. It’s important to note that the THC content can range from the mid-teens to the mid-20s, so make sure you check the THC before you buy.

Blue Dream consistently ranks as the most popular strain on the market. And, for good reason. For one, it’s simply a great, highly versatile strain. And, despite being a Sativa-dominant, Blue Dream is known for producing relaxing effects similar to many Indica-dominant strains, while also producing effects characteristic of many Sativa-dominant strains, including cerebral euphoria, energy, and focus.

From a growing perspective, Blue Green is easy to grow and produces large yields. It’s an “open source” strain, in that, unlike many strains, its genetics aren’t hoarded by specific groups or communities

As High Times’ Danny Danko notes, “She’s a clone-only strain that isn’t hoarded or claimed by one particular group. Blue Dream is considered more ‘open-sourced’ and cuttings are easy to find.”

One word of caution: not all Blue Dream strains are the same. Not only are there several phenotypes, but the quality can vary profoundly based on who the grower is. So stick to reputable growers and dispensaries.

CBD 1:1 Critical Mass is a nicely balanced Indica-leaning strain that many describe as tasting like lemon cake. Yum! With equal amounts of THC and CBD, Critical Mass produces a well rounded, mellow body high with mild cerebral effects. Its rich CBD content will melt away anxiety while relaxing you. It won’t get you too high, which makes it ideal for games requiring a high degree of mental clarity.

Durban Mango is quickly becoming a popular strain for gamers. Given its parentage, Mango x Durban, that’s not surprising. Durban is a famous pure sativa landrace strain known for being highly stimulating, a quality that was clearly passed down to Durban Mango. After you toke, prepare for a slow build of upbeat cerebral effects coupled with a body high that won’t make most users sleepy or couch-locked.

Chernobyl was bred by the legendary Subcool (aka “The Weed Nerd”), who crossed Trainwreck and Trinity, and pollinated with Jack the Ripper. The results were phenomenal. Chernobyl earned the distinction of being recognized by High Times as one of 2010’s Strains of the Year 2010, a distinction that is well-deserved. This epic strain gives users an uplifting, powerfully euphoric and intensely energetic high perfectly suited for gaming while high. It’s also known to melt away anxiety and stress, effects coupled with sustained bursts of energy, allowing users to game high for hours on end. 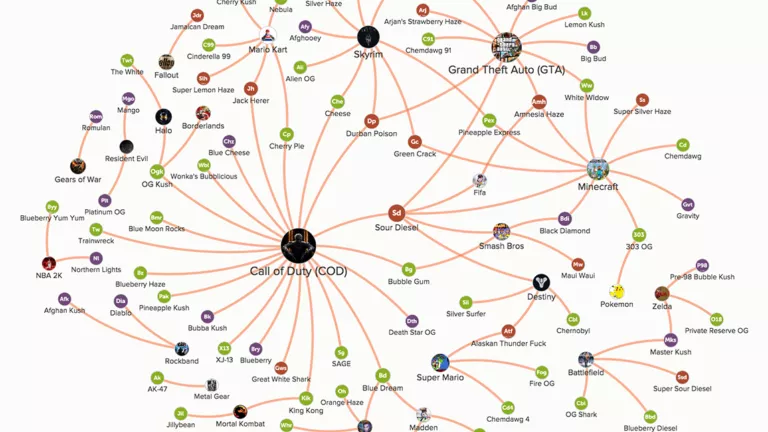 Do you like gaming while high? Do you have a favorite strain? Let us know by dropping a line!

For the best cannabis strains that will accentuate your state of mind, take a look at our Lifestyle Spectrum and menu. Stop by a top-rated dispensary near you in Seattle or Oklahoma City to meet with a cannabis guide that will help you find the perfect product to accompany your desired journey.