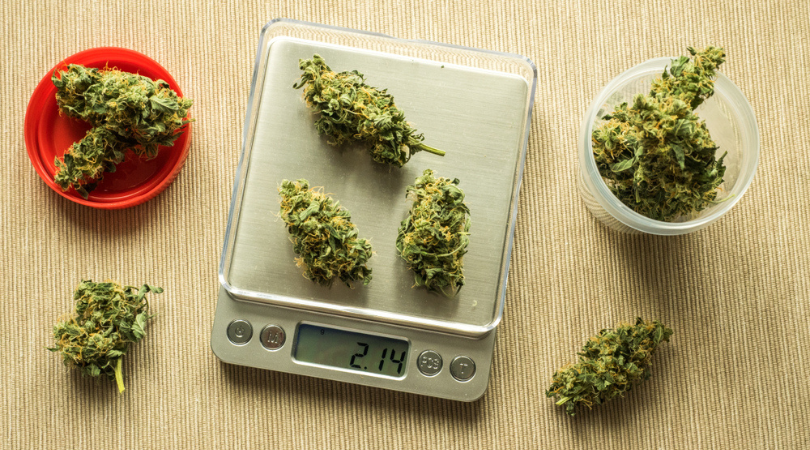 HOW MUCH IS AN EIGHTH OF WEED?

Buying cannabis but not sure how much to get? One of the most common quantities you’ll hear recommended by experienced smoking buddies and even budtenders is “an eighth of weed”. This is usually enough weed to last you for a few sessions, especially if you’re an occasional smoker. However, you might wonder - how much is an eighth of weed?

Unless you’ve been buying weed for a while, it can be hard to quantify exactly how much you’re getting when you buy an eighth of weed. What’s more, you might wonder whether you’d be better off buying a quarter or even a half. You might also have other questions, such as how many joints can you make with an eighth of weed. Luckily, we have the answers to your questions.

How Much Is A Gram Of Weed?

Ignoring the nicknames such as “eighth” and “quarter”, quantities of marijuana are generally weighed in grams. While there are approximately 28 grams of weed in an ounce, most users buy much smaller quantities, with the smallest quantity available generally being 1 gram. So exactly how much is a gram of weed?

A gram of weed is usually just a couple of medium-sized buds, or even one thick, dense bud. It’s often referred to as a “dime bag” or a “ten bag” as you can often buy a gram of weed for $10. However, the cost of a gram of weed can vary significantly based on the quality of the strain and where you buy it from.

You won’t get much with a gram of weed. It’s generally enough to fill one joint, or maybe two joints if you want to stretch it out for a couple of smoking sessions. It can also give you approximately two bowls of weed. With that said, users generally buy more than a gram, especially as you get a better price the more you buy.

How Many Grams Are In An Eighth Of Weed?

Buying an 8th of weed (often referred to simply as “an eighth”) will give you 3.5 grams of cannabis. That’s because 3.5 grams is an eighth of an ounce (28 grams). It’s a good idea to buy an eighth of weed if you want enough weed to last you for multiple sessions. Infrequent smokers may find that an eighth can even last them for a week or more.

Usually, a joint of weed contains 0.5 to 1 grams of cannabis, depending on how strong you want your joints to be. That means that, even if you’re making well-packed joints, you can make 4 joints from an eighth of cannabis. If you want to make smaller joints, you can easily make 7 joints of weed out of an 8th.

How Much Is An Eighth Of Weed?

An eighth of weed is 3.5 grams - enough to fill anywhere from 4 to 7 joints (or around 5 to 10 bowls of cannabis). However, some users might also wonder how much an eighth of weed is in terms of price. This can vary depending on the strain you buy, but you’ll get a much better price for an eighth than you would for a single gram.

The more grams you buy, the better price you get for your weed. The price of an eighth can vary significantly depending on the type and quality of strain you buy. However, you’ll usually make great savings. For example, 3.5 grams of Phat Panda Tahoe OG or Solstice Apple Fritter is just $29.99.

Popular, high-quality strains may cost more. For example, 3.5 grams of Secret Gardens of WA Fatso or Secret Gardens of WA Blueberry costs $55.00. However, you’ll still be getting plenty of top-notch weed for your money. Buying an eighth is a good idea for those who only need a moderate amount of cannabis. It’s also a good idea if you want to buy and try multiple strains.

How Much Is A Quarter Or Half Of Weed?

You might also wonder about higher quantities of cannabis, such as a “quarter of weed” or even “a half”. These terms also refer to divisions of an ounce. A quarter ounce is 7 grams of weed whereas a half-ounce is 14 grams. You might want to buy one of these quantities if you find a strain you like and want to get more weed for your money.

Buying a half or quarter of weed will usually give you better per-gram savings. For instance, while an eighth of Artizen Jack Herer costs $33.00, a quarter gives you twice as much for only $62.01. Buying a half-ounce will give you even greater savings at $119.99 for 14 grams.

Some users might want to buy even higher quantities. For instance, you can buy an ounce of weed (28 grams) if you want enough to last you for a very long time. You’ll also get a better per-gram price. Keep in mind that most states have a public possession limit of 28 grams, so pay attention to local laws and don’t exceed the limit.

Buying an eighth of weed is a good idea if you want enough to last you for a few smoking sessions. You might also want to buy an eighth of multiple strains if you’re looking to test a variety of cannabis strains. The cost of an eighth will vary depending on the strain you choose, but you’ll get a much better price than you would if you bought a gram of weed.

Whether you’re looking to buy an eighth, a quarter, or even a half-ounce or full ounce of weed, it’s important to find a reliable dispensary with high-quality products. You can find Origins Cannabis dispensaries offering various strains and quantities of marijuana in Washington and Oklahoma.